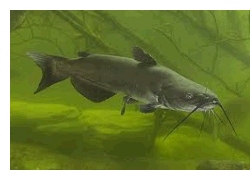 Adaptation of the Channel Catfish
Since the Red River has murky water with low light penetration, the catfish  has special senses that help it survive in this environment.  One of these is their extremely sensitive nose, with a high level of olfactory receptors, which are the pores that detect a scent. An example is the catfishes' ability to detect amino acids at one part per million. The catfish also has tastebuds spread along their entire body to help detect prey, but the main concentration of tastebuds is on their "whiskers", known as barbels. On these barbels is a concentration of 25 million taste buds per square millimeter. This helps them find food in the murkey water of the red river, or at night if human activity forces them to stay hidden during the day.

Another way they have adapted to the Red River is the way they communicate with each other. While channel catfish in clear water use more visual signs, catfish in the Red River and other muddy waters use chemicals to communicate, called chemo toxic cues. These chemical cues can tell the species, age, and reproductive status. Another sightless communication method using special sonic muscles in the swim bladder to create vibrations in the water, which other catfish can feel in their swim bladder. These features help the catfish survive better then organisms that rely on sight, helping them find a mate to reproduce easier, therefore producing more offspring.

Channel catfish have some competition for their food, mainly being other carnivorous fish such as the Northern Pike, large Walleye, and humans, all which take smaller fish out of the water, and the other fish can occupy some of the catfish's choice habitat. The catfish population is stable, no stocking is required and catch limits are average, not indicating an overpopulation problem. The catfish will lay about 4000 eggs, but success rate is only about 50% hatched, and predetors will eat a large amount of the surving fry.